Stellar’s 100% owned tin projects have an enviable location within the well-established mining district on the West Coast of Tasmania with access to established infrastructure including nearby water and renewable power, access to the port of Burnie 150km to the north via sealed highway for export of concentrate, and a competitive local market for services, mining and processing inputs and labour.

Stellar’s flagship Heemskirk Tin Project is just 18km to the southwest of the Renison tin mine, the largest and most productive tin mine in Australia. Including Renison, there are 5 major underground metal mines, 3 of which are operating, within 30km of the Heemskirk Tin Project.

Stellar holds the following tin licenses in the West Coast of Tasmania near the historic mining town of Zeehan:

Stellar holds the best Portfolio of Tin Assets in Australia with Secure ML’s over Heemskirk and St Dizier and a large EL package providing further upside and flexibility. 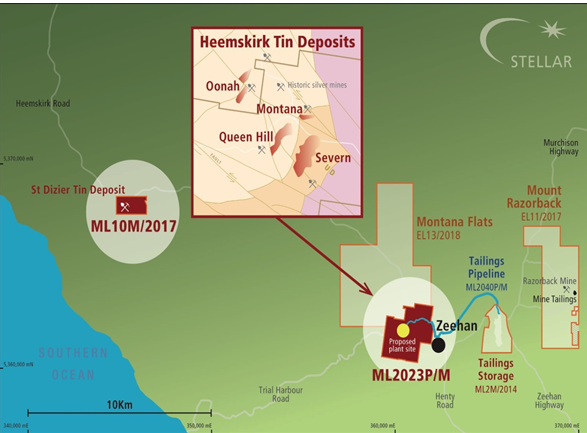 The Heemskirk Tin Project Scoping Study completed in 2019 is based on development of an underground mine, processing plant, tailings storage facility and surface infrastructure to mine ~ 350ktpa ore from the Queen Hill and Severn tin deposits (2 of the 4 Heemskirk Tin Project deposits) over a 10 year mine-life. The Scoping Study also includes open-pit mining of the St Dizier satellite deposit and trucking to the processing plant at Heemskirk during the final year (year 11) of the project.