St Dizier is a satellite open-pit tin deposit located 20km to the northwest of Zeehan. St Dizier is a tin skarn, formed by metasomatic alteration of an original dolomite unit by tin bearing fluids emanating from the Heemskirk Granite. Much of the dolomite is altered to serpentine-magnetite-calc-silicate rock flanked by shales to the south and quartzites to the north. The total meta-sediment package has the form of an east-west trending, vertically dipping roof pendant surrounded by Heemskirk Granite. The skarn consists of magnetite-serpentinite-cassiterite-schoenfliesite-scheelite-bismuthinite. Tin mineralisation is zoned with dominantly cassiterite in the west and increasing amounts of schoenfliesite and other tin species to the east. 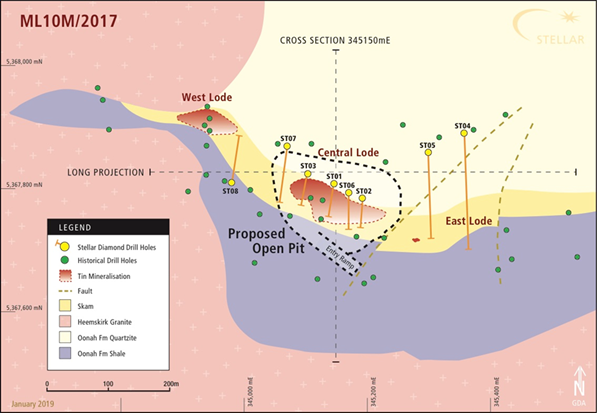 The Indicated Resource at St Dizier includes the West and Central Lodes. The bodies crop-out at the surface and strike east-west over a distance of 400m. They dip vertically to a depth of 200m from the surface (in the case of Central) and vary in width from 3m to 40m. Higher tin grades occur between the surface and a depth of 70m in the Central Lode and grades are higher nearer to the surface making the deposit attractive as a potential low-cost open pit development. The smaller Western Lode could also potentially be considered for open pit mining but has not been included in the mine design at this stage. 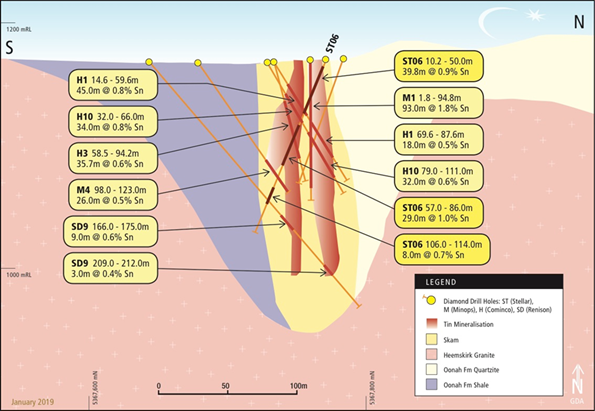 A total mineral resource for the St Dizier satellite tin deposit of 2.3mt @ 0.61% Sn (13,786t of contained tin) at a cut-off grade of 0.3% Sn was defined in accordance with the JORC Code 2012 by technical consultant, Resource and Exploration Geology, in March 2014.

A mining study on the St Dizier Deposit completed by Polberro Consulting in July 2015 forms the basis of the mining assumptions used in the 2019 Scoping Study. The Polberro mining study included; pit optimisation, open pit mine design, consideration of geotechnical factors, bench geometry, mine production rate and mining operating and capital costs.

The Polberro St Dizier mining study focused purely on part of the Central Lode Indicated Resource and determined that an open pit mining method which is well suited to the Central Lode mineralisation as it crops out at the surface, has its highest grades within 50m of the surface, occurs as multiple lenses over widths of 3m to 40m and is surrounded by relatively competent wall rocks. It is also the lowest cost mining method available for the style of mineralisation.

Key results from the Polberro St Dizier mining study, used in the 2019 Scoping Study include:

The Heemskirk Tin Project 2019 Scoping Study includes mining from the St Dizier satellite tin deposit which will be mined as an open pit mine and processed in the Heemskirk plant during the last year of the project. 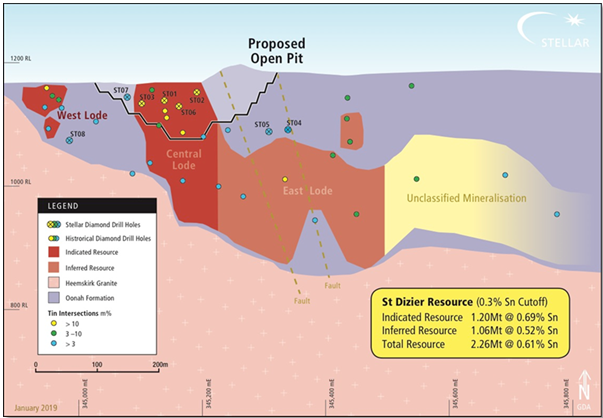 St Dizier ore is similar in complexity to that at Upper Queen Hill. Stage 1 test work on diamond drill core from St Dizier has been undertaken by ALS Metallurgical Laboratory in Burnie and supervised by Worley Parsons. The test work showed the following outcomes: