The style of mineralisation at the historic Razorback Mine is essentially the same as at Renison Mine, located 7km along strike to the north.

The geology of the Razorback Mine is dominated by the Razorback Fault where the Cambrian serpentinite is in faulted contact with the younger Dundas Group Red Lead Conglomerate and Hodge Slate. The Serpentinite has been strongly dolomitized and talc altered within 20-30m of the fault contact.  The sequence strikes north-northwest and is near vertically dipping with the fault dip steep east near surface to steep west dipping below 100m depth.

Tin mineralisation is hosted within the talc-carbonate altered serpentinite and the Red Lead Conglomerate where they are adjacent to the Razorback Fault.  The mineralised lodes are semi continuous and plunge steeply south within the plane of the fault.  Mineralisation consists of semi-massive pyrrhotite with cassiterite, pyrite, arsenopyrite, chalcopyrite, sphalerite and galena.

The lode is wedge shaped with a width of 10-15m at the top (base of pit floor), narrowing to widths of 2-3m at a depth of approximately 100m below the pit floor. The average length of the significant intersections listed in Appendix 1 is 6.4m. The Razorback lode strikes over [200m] and possibly plunges steeply south to over 400m in depth. 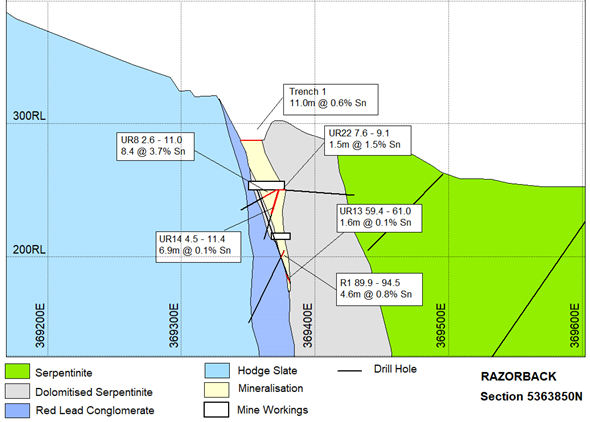 Initial exploration over the Razorback Tin Mine was undertaken from 1958 to 1969 by the Bureau of Mineral Resources and the Tasmanian Mines Department who completed 7 surface diamond drillholes for 528m.

The Razorback Mine was operated as an open pit mine by Minops Pty Ltd from 1975 to 1978 during which time an estimated 180,000 tonnes of ore at ~0.6% Sn was mined and processed by an on-site processing plant and tailings facility.

In 1978 Minops completed a further 7 surface diamond drillholes aimed at locating extensions of the ore to the south of the open cut.

In 1979 a Joint Venture was signed between Minops and CRA Exploration who proceeded to drill 5 deeper surface diamond drillholes over the next few years. In 1982, CRA Exploration decided not to procced further with the project.

In 2018, Stellar dug and sampled 3 costeans in the pit floor. 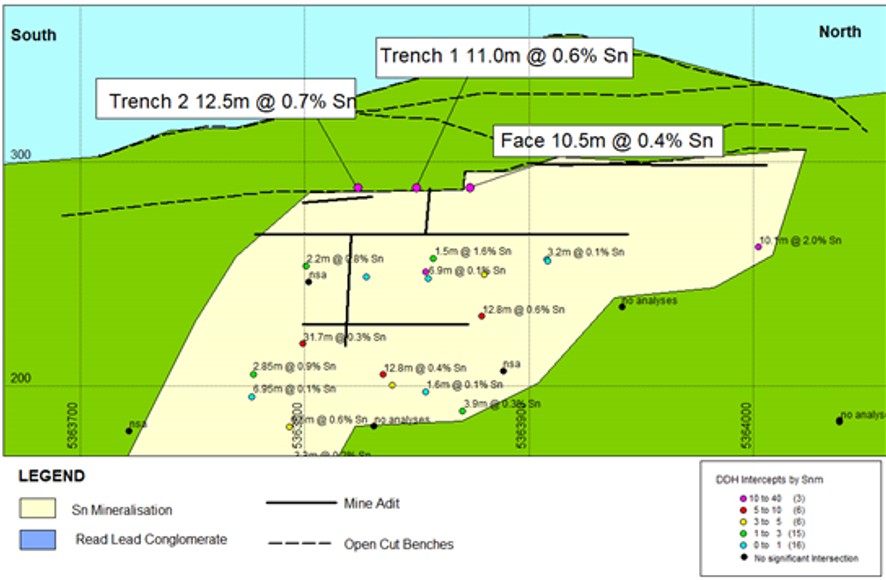 An Exploration Target of 180,000 – 220,000 tonnes @ 0.8 – 1.0% Sn at a cut-off grade of 0.3% Sn has been defined to a depth of 100m below the previously mined Razorback pit floor in accordance with the JORC Code 2012 by technical consultant, Resource and Exploration Geology, in July 2019. There has been no material change to assumptions since the estimate was completed in 2019.

There is potential for discovery of further mineralisation along the Razorback Fault over the 7km of strike length between Razorback and Rension and including the Grand Prize Tin deposit, also within Stellar’s Exploration Licence (EL11/201).

The Grand Prize-Razorback Fault structure is a large mineralizing system. Its proximity to the Pine Hill Granite and the Renison Bell Tin Mine make it highly prospective for structural and replacement style tin-copper deposits.

Broad spaced historic exploration of the Grand Prize Fault suggests it is a large mineralizing system, although possibly sub ore grade at this stage. There are ore grade intercepts within the larger low-grade intercepts suggesting there may be some scope for targeting and modelling of higher-grade zones. There is also the possibility of recovering a copper concentrate adding value to the mineralisation. To put it into perspective, the known mineralizing system covers an area twice that of the Severn deposit at Zeehan and remains open down dip. 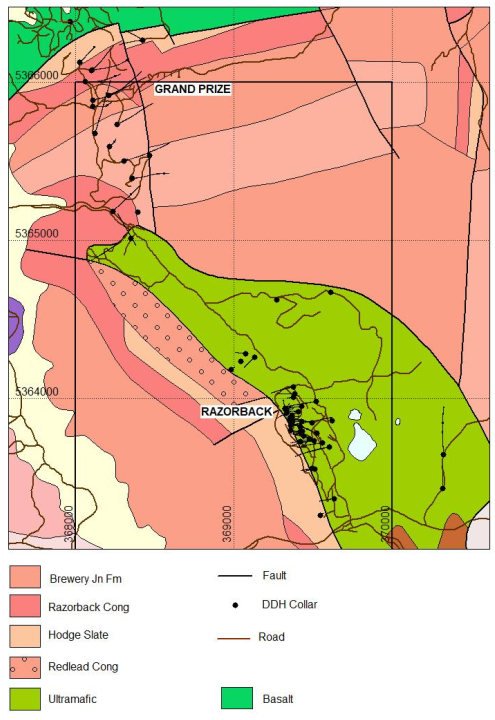 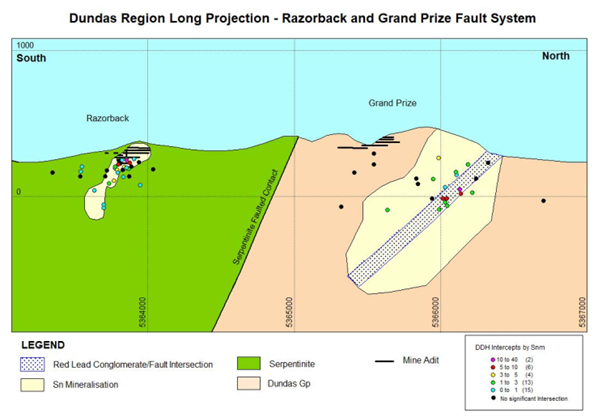